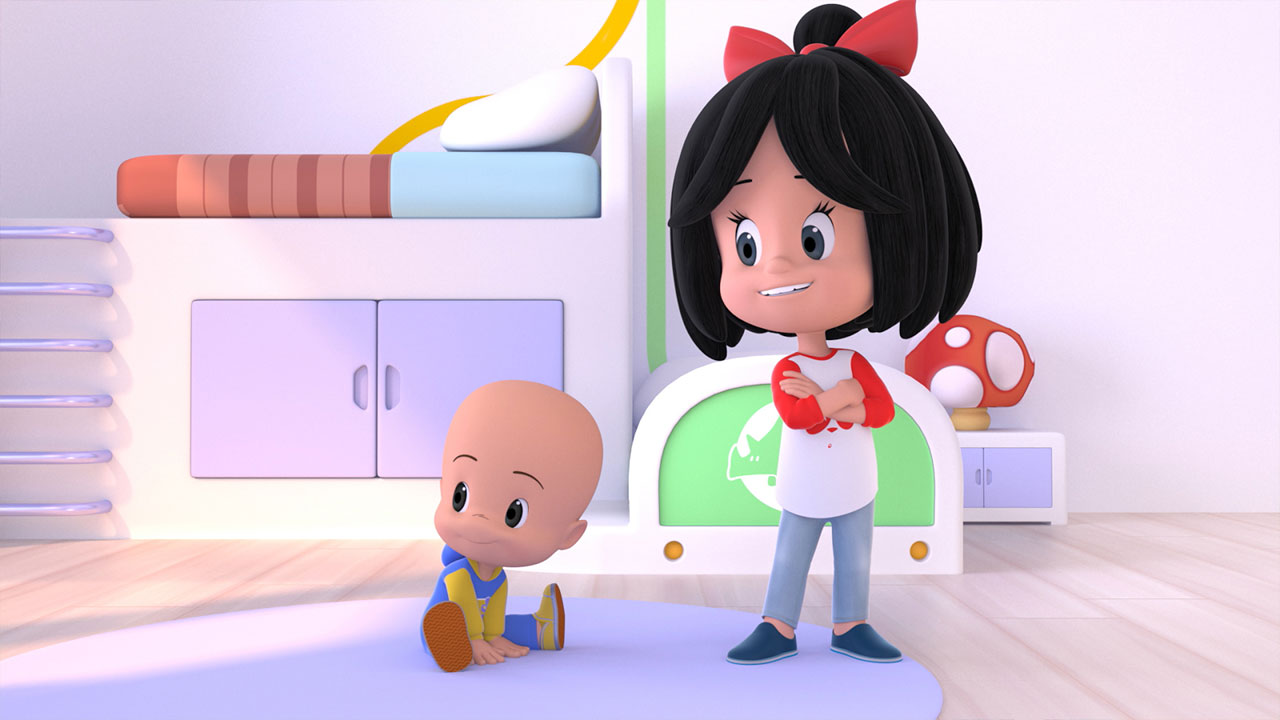 Madrid, November 2017. HITN has reached an agreement with producer Ánima Kitchent to include ‘Cleo & Cuquin’ in an early literacy initiative to help ensure kids from trans-cultural homes enter kindergarten on equitable footing with their peers.
The initiative will be managed by HITN Learning, the network’s early learning division that produces educational products. It’s based on a transmedia approach to promote early literacy among children aged four and five. HITN pioneered the transmedia approach for bilingual preschool education earlier this decade as lead partner of the Early Learning Collaborative (ELC), recipient of a $30 million Ready to Learn Grant from the U.S. Department of Education.

In this successor enterprise, ‘Cleo & Cuquin’ will star in a series of mobile apps and hands-­‐on kits featuring Spanish/English bilingual educational content whose purpose is to develop the parallel acquisition of two languages, and take first steps towards the math and literacy skills expected in kindergarten.

A variety of physical and digital educational formats will be launched in the US targeting public and private schools, day care and community centers, and will be available in stores beginning the second half of 2018.

Among the many positive messages conveyed, ‘Cleo & Cuquin,’ teaches young viewers about the importance of play and a healthy lifestyle. It shows children that creativity is the best way to resolve conflict and models a step by step approach to problem solving, which is why this particular transmedia brand was selected to form part of this important educational initiative.

‘Cleo & Cuquin’ (52×7’ television series) is targeted at pre‐schoolers ages four and five and features the Telerin brothers and sisters, especially big sister Cleo and the baby of the family, Cuquin. Each episode sees the little kids tackle a big adventure as Cuquin’s mischief causes conflicts or gets Cleo and her brothers and sisters into trouble, and they come up with solutions the only way kids know how: by playing! They pretend to be astronauts, gardeners, detectives, monsters or whatever they need to be to get the job done. Best of all, at the end of every episode, Cleo figures out what she wants to be when she grows up -­‐ at least for that day! These demonstrations of positive social emotional interactions and problem solving skills will serve as key underpinnings for HITN Learning’s educational products.

Familia Telerin was a brief cartoon aired in Spain and Latin America in the late 60s. It proved hugely popular, as it featured a catchy song telling kids it was time to turn off the TV and head for bed, helping parents with the tricky task of settling them down for the night. The clip aired for two decades in Spain and was also broadcast in Latin America, where it featured in TV programming for many years.

With a view to rekindling this success and a clear international approach, Televisa joined forces a year ago with Ánima Kitchent, Famosa, MAI and Selecta Visión to co-­produce the new transmedia brand based on the Familia Telerin.

‘Cleo & Cuquin’ has brand new scripts, updated characters and a meticulous design. As well as the TV show, the brand boasts apps like the “El Acostador” bedtime app, web content and music video clips. ‘Cleo & Cuquin launched on the Familia Telerin’s YouTube channel, and after just a year and a half its 17 music video clips have chalked up over 600 million views and 1.5 million subscribers.

HITN Learning’s product plans for ‘Cleo & Cuquin’ include a series of Family Fun Kits focusing on math and literacy concepts. The kits will offer learning concepts disguised as fun. Fun Kit components will spark learning in young minds. A series of mobile apps, inspired by the award-­‐ winning (Parent’s Choice, Kidscreen) “Pocoyo Playsets” developed under the ELC grant, will provide a range of gaming, recording, and augmented reality experiences.

Toy maker Mattel recently announced that it had been awarded the worldwide Toy Master License for ‘Cleo & Cuquin’. The first line of products is set to be rolled out in Mexico in time for Christmas 2018, following the TV broadcast of the show in the North American country. This initial expansion into the international market will be underpinned by broadcasting agreements in a range of markets in the coming months, which will position ‘Cleo & Cuquin’ firmly as a strong global brand.

Ánima Kitchent CEO Víctor M. López said: “HITN, which has outstanding experience and prestige in the field of education, rounds out Cleo & Cuquin’s global strategy by further developing the edutainment component of our brand in the world’s largest market.”

“We are very excited to be working with Ánima Kitchent,” said Michael D. Nieves, President and CEO of HITN. “This partnership is a prime example of how HITN keeps pushing the boundaries to provide educational and entertaining content. Cleo & Cuquin will play a major role in the launch of HITN Learning’s next line of educational products.”